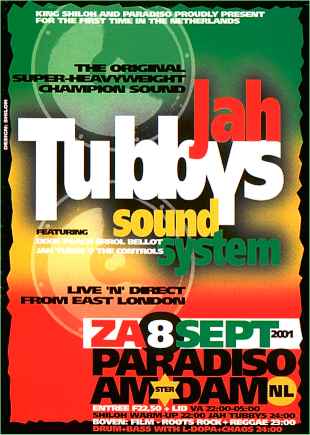 King Shiloh & Paradiso are proud to present the 5th Edition of the DubClubY2KSpecial series of Roots 'n' Culture dances, featuring strictly the best sound systems from the UK, live and direct in Amsterdam. A truck full of oversize speaker boxes & amplifiers and a van full of singers, technicians and crew make the journey across the channel for just one session, a piece of live sound system culture live n direct in Paradiso! This chapter features a living legend within sound circles, a corner stone of the movement, hailing from East London, the original super heavyweight champion, Jah Tubbys World Sound.

Jah Tubbys began building his massive reputation in the late seventies by confronting the well established leaders of the time; sounds like Moa Ambessa from London & Quaker City from Birmingham and of course the mighty warrior sound Jah Shaka, also from the capital. Throughout the eighties Jah Tubbys was feared and revered throughout the UK and beyond,
his only true rival being Jah Shaka.

The specialised self built equipment combined with his dubplate exclusives (from the best Jamaican singers of the time) put fear in his 'opponants' as did his MC's, singers like Dixie Peach & Errol Bellot. Aba-Shanti who many would say is the Year 2000 sound (see DubClubY2K Part 2) worked many years learning the trade with Tubbs. In the middle of the nineties Jah Tubbys let the sound system take a back seat, concentrating on the increasingly successful studio and
equipment building side of things.

Until the Y2K that is. Jah Tubbys Sound is now back on the road again! Sounds Systems across the length and bredth of the UK are feeling the Tubbys 'weight' once again and now its Amsterdams turn. For the first time out of the UK this century, the legendary super heavyweight champion, Jah Tubbys World Sound. Alongside Jah Tubbs at the control tower will be original singers Dixie Peach & Errol Bellot plus MC Gadman and the full JTS Crew. Feel the music and feel the vibes, Jah Tubbys style! Exclusively to Paradiso, A'dam